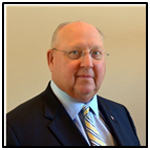 Prior to working with GATX Terminals, when he first moved to California in 1979, Mr. Wright was founding part owner of Crystal Energy, a company engaged in crude oil and products trading.  After selling his interest in Crystal Energy, Mr. Wright developed and owned Baja Resources, an investment company that invested in a variety of businesses which included equipment leasing, oil and gas production, development of reclamation projects for coal mines and pipeline projects.

Mr. Wright received his B.S. in Electrical Engineering in 1967 and his M.S. in Business Administration in 1969 from the University of Wyoming.   Mr. Wright also served as an officer in the US Army for two years in the Washington DC area and Korea.   Mr. Wright is married with three adult children and four grandchildren.

Mr. Wright is also currently a partner in California Canadian Business Associates, LLC, a partnership focused on the development of various forms of trade between California and Canada.

Click Here to see all of Mr. Wright’s business organizations and associations.