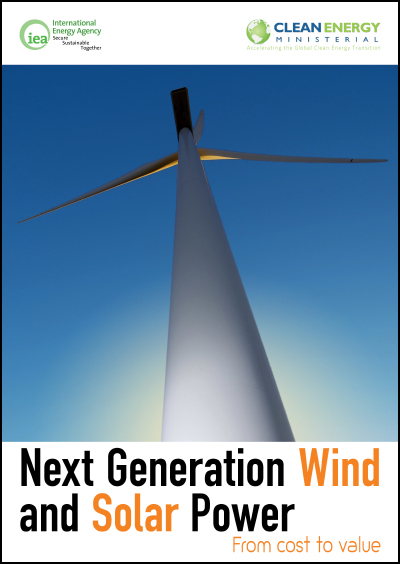 As next-generation wind and solar power grows in the energy mix, a focus on their falling generation costs alone stops short of what is needed

In a paper released today on the side-lines of the Clean Energy Ministerial in San Francisco, the International Energy Agency argues that a new phase of deployment in wind and solar photovoltaics (PV) – currently the fastest-growing sources of electricity globally – is emerging, in which wind and solar PV are technologically mature and economically affordable. However electricity generation from both technologies is constrained by the varying availability of wind and sunshine, which can make it more difficult to maintain the necessary balance between electricity supply and consumption.

As these variable renewables enter this next generation of deployment, the issue of system and market integration becomes a critical priority for renewables policy and energy policy more broadly. The paper highlights that this will require strategic action in three areas:

In addition, the paper argues that unlocking the contribution of system-friendly deployment calls for a paradigm shift in the economic assessment of wind and solar power. The traditional focus on the levelised cost of electricity (LCOE) – a measure of cost for a particular generating technology at the level of a power plant – is no longer sufficient. Next-generation approaches need to factor in the system value of electricity from wind and solar power – the overall benefit arising from the addition of a wind or solar power generation source to the power system. System value is determined by the interplay of positives and negatives including reduced fuel costs, reduced carbon dioxide and other pollutant emissions costs, or higher costs of additional grid infrastructure.

In addition to general analysis and recommendations, the paper also includes summaries of three case studies in China, Denmark and South Africa..

Next-Generation Wind and Solar Power: from Cost to Value is available for free download here.