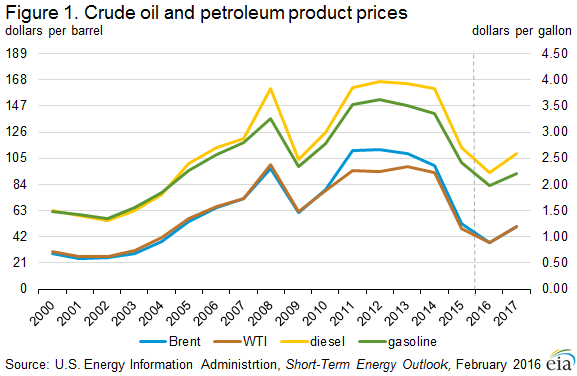 The lower outlook for petroleum product prices is based on lower expectations for crude oil prices. North Sea Brent crude oil prices are expected to average $38 per barrel (b) in 2016 and $50/b in 2017. Forecast West Texas Intermediate (WTI) crude oil prices are expected to average the same as Brent in both years. However, the current values of futures and options contracts continue to suggest high uncertainty in the price outlook (Figure 2). For example, EIA’s forecast for the average WTI price in May 2016 of $36/b should be considered in the context of recent Nymex contract values for May 2016 delivery (Market Prices and Uncertainty Report) suggesting that the market expects WTI prices to range from $21/b to $58/b (at the 95% confidence interval). 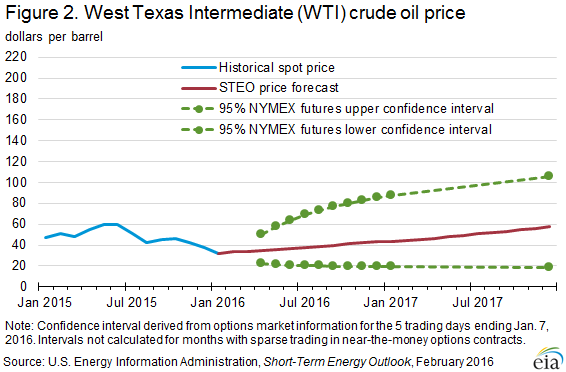 The confidence range for crude oil prices as shown in Figure 2 is derived using a variation of the Black-Scholes model that is often used by financial analysts to estimate the price of options. EIA starts with options prices for WTI crude oil, and uses the Black-Scholes model to calculate the implied volatility. WTI futures contracts and options are the among the more actively traded commodity derivative products, with many producers, consumers (including refiners, airlines, trucking companies, and fuel distributors), and other investors and risk-takers involved. The confidence interval is therefore a market-derived range that is not directly dependent on EIA’s supply and demand estimates.

Continuing increases in global liquids inventories have put significant downward pressure on oil prices since mid-2014. After growing by an estimated 1.8 million barrels per day (b/d) in 2015, global oil inventories are forecast to grow by 1.4 million b/d in the first quarter of 2016. The largest inventory builds occur in the first half of 2016, helping keep Brent prices below $40/b through August.

During January 2016, daily changes in crude oil prices were highly correlated with daily changes in global equity indexes. The increased co-movement and higher volatility likely reflect increased uncertainty about future global economic growth. Changes in overall demand for risk assets, such as commodities and equities, by investors and market participants may also be playing a larger role in price discovery across global asset markets compared with previous months.

Changes in non-OPEC production are driven by changes in U.S. tight oil production, which is characterized by high decline rates and relatively short investment horizons, making it among the more price-sensitive globally. Forecast total U.S. liquid fuels production declines by 0.5 million b/d in 2016 and remains relatively flat in 2017.

Forecast OPEC crude oil production increases by 0.7 million b/d in 2016 and by 0.6 million b/d in 2017 with Iran accounting for most of the increase in 2017. EIA assumes that a collaborative production cut among OPEC members and other major producers does not occur in the forecast period, as major OPEC producers continue their stated strategy to maintain market share.

On February 3, the U.S. Energy Information Administration (EIA) released aPADD 1 and 3 Transportation Fuels Markets study, which examines transportation fuels (motor gasoline, distillate fuel, and jet fuel) supply, consumption, and distribution at both the PADD level and for specific areas within the PADDs. 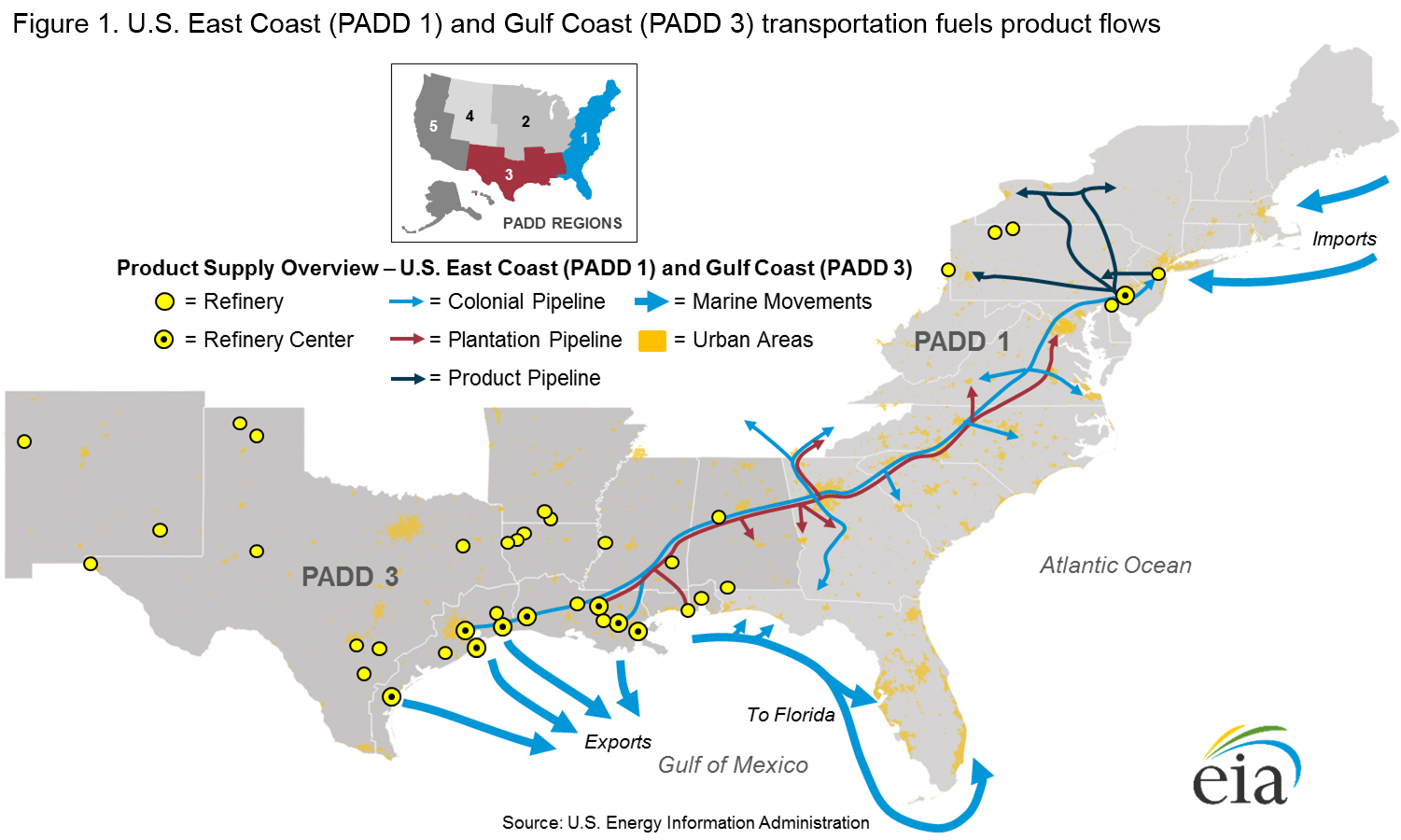 The East Coast region includes states from Maine to Florida along the U.S. Atlantic Coast. The Gulf Coast region comprises states between New Mexico in the west to Alabama in the east, primarily along the Gulf of Mexico. For this study, transportation fuels include gasoline, distillate fuel (including diesel), and jet fuel. Residual fuel oil supply is also analyzed where applicable. 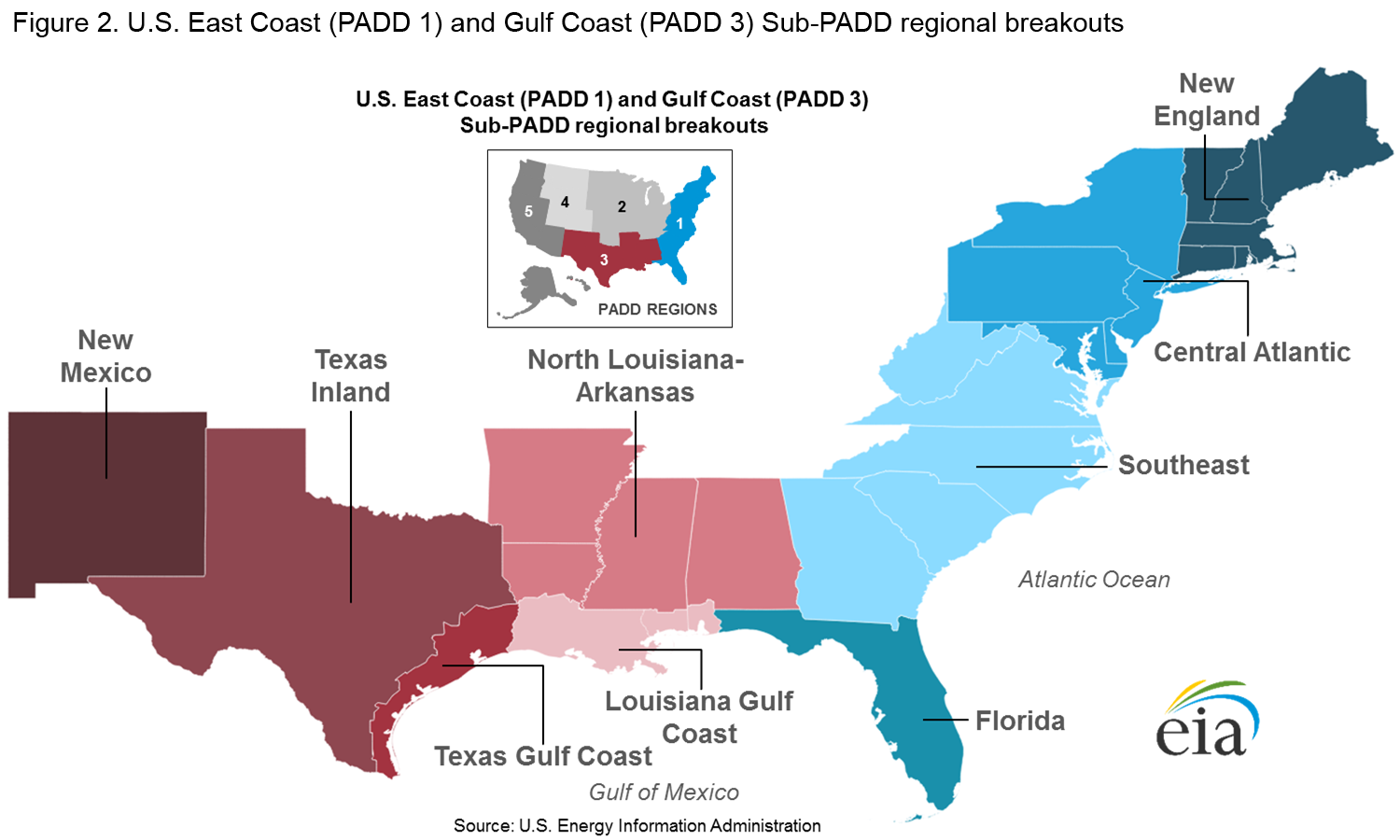 This study is the second in a series by EIA to inform its analyses of petroleum product markets, especially during periods of supply disruptions and market change. A previously published study analyzed PADD 5 (West Coast) transportation fuels markets. Planned studies will analyze PADD 5 crude supply and the transportation fuels markets in the Midwest (PADD 2) and Rocky Mountains (PADD 4).