Fourth-quarter 2015 refinery outage report released
EIA has issued a report on expected fourth-quarter refinery outages and their potential implications for the availability of gasoline and distillate supply at the Petroleum Administration for Defense District (PADD) and sub-PADD levels. This report analyzes the availability of refinery capacity to produce diesel fuel and heating oil (distillate) and gasoline, focusing on two refinery units, the atmospheric crude distillation unit (ACDU) and the fluid catalytic cracking unit (FCCU), which are strongly correlated with distillate and gasoline production, respectively. In addition, data for planned maintenance on catalytic reforming units (CRU) and hydrocracking units (HU) are provided. The report also contains a discussion of current market conditions and average historical unplanned outages.

Refinery outages result from the planned shutdown of refinery units for maintenance and upgrades, and from unplanned shutdowns from a variety of causes such as mechanical failure, bad weather, power failures, fire, and flooding. Planned maintenance is typically scheduled when refined petroleum product consumption is relatively low. 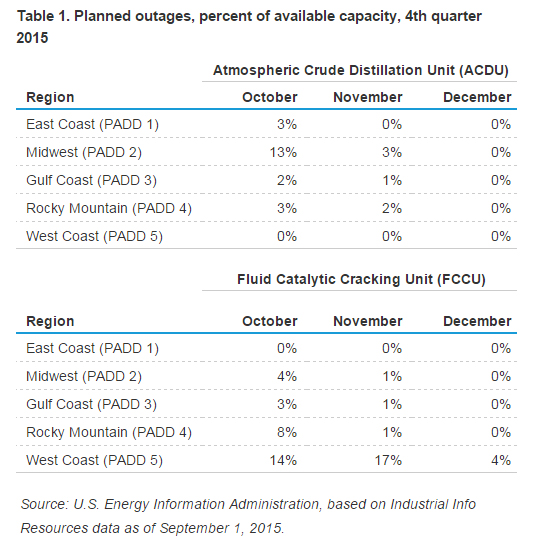 In most regions, fourth-quarter planned maintenance is light compared to last year as well as to historical levels. However, in the Midwest, 13% of ACDU capacity is expected to be offline for maintenance in October. After generally staying above the five-year range for much of 2015, PADD 2 ACDU gross inputs fell off sharply in early October. For the week ending October 9, the rolling four-week average for PADD 2 gross inputs was 209,000 barrels per day (b/d) lower than the five-year average. Despite the decrease in gross inputs, distillate inventories remain above the five-year average for this time of year and gasoline inventories are similar to where they were last year. While Midwest refineries supply most of the distillate fuel and gasoline that is consumed in the region, the Midwest also receives products from the Gulf Coast, including supplemental supply during disruptions.

PADD 5 (West Coast) planned ACDU maintenance is minimal over the period, but planned FCCU maintenance in October and November is more than 50,000 b/d higher than the 10-year average and more than 25,000 b/d higher than the 10-year maximum. The ongoing unplanned FCCU outage following the February 18 explosion at the ExxonMobil refinery in Torrance, California, has continued to put upward pressure on gasoline prices in the region. Imports of total motor gasoline to California ranged between 28,000 b/d and 68,000 b/d in March through July, compared with an average of 5,000 b/d in 2013-14. Further outages, either planned or unplanned, would exacerbate the supply situation. PADD 5 gasoline inventories declined steadily during the summer driving season, reaching a multiyear low of 25.7 million barrels on August 21. Since then, gasoline inventories have rebuilt and have been above the five-year average since September 11. Distillate inventories have been above the five-year average for much of the year.

Effects of unplanned refinery outages on prices vary by region

Unplanned refinery outages can have noticeable effects on liquid fuel markets, disrupting supplies of gasoline and distillate. In late August, unplanned outages occurred at two refineries on the East Coast, Petroleum Administration for Defense District (PADD) 1, affecting a significant portion of PADD 1 gasoline production capacity. However, unlike similar incidents on the West Coast (PADD 5) and in the Midwest (PADD 2), there was no significant movement in gasoline prices as a result of the outages. How a region is supplied, what alternative supply options exist, and the costs and lead times for those options will largely determine to what extent prices react to unplanned outages (Figure 1). 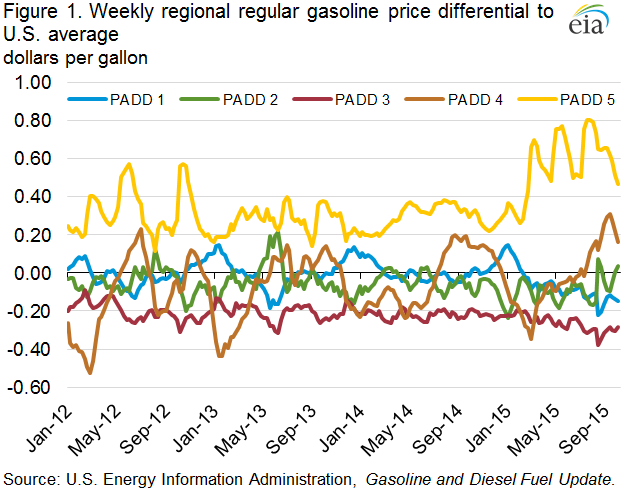 While refineries make arrangements for alternative sources of supply during periods of planned maintenance to ensure that obligations are met, it sometimes takes days or weeks for markets to adjust to the sudden loss of production when an unexpected outage occurs. As a result, unplanned refinery outages often result in a reduction in supply that causes prices to increase, sometimes dramatically. The severity and duration of these price spikes depend on how quickly the refinery problem can be resolved and how soon supply from alternative sources can reach the affected market.

All five PADDs have two immediate sources of alternative supply: inventories and production from other in-region refineries. However, should these sources prove insufficient, the next option for alternative supplies is somewhat different for each region (Figure 2).

The West Coast is isolated from other U.S. markets and located far from international sources of supply, so the region is dependent on in-region production to meet demand. Mainland PADD 5 has three distinct supply/demand centers (Pacific Northwest, Northern California, and Southern California), separated from each other by a lack of north-south pipelines within the PADD and from other U.S. markets by mountains to the east. In the event of a major unplanned refinery outage — such as the one that occurred atExxonMobil’s refinery in Torrance, California in February — inventories and production from unaffected refineries in the immediate area are insufficient to meet demand. Limited pipeline connectivity between market centers and neighboring regions, as well as the more stringent product specifications for California, mean that the only remaining alternative resupply option for PADD 5 is imports.

Since the Torrance outage, imported supplies of gasoline have been arriving in Southern California from all over the world at an average rate of 27,000 — 68,000 barrels per day (b/d) for March through July (latest state-specific data available). This compares with an average of 5,000 b/d in 2013-14. Total motor gasoline imports into PADD 5 as a whole were 79,000 b/d for the week ending October 9. The distance required for these imports requires long lead time and higher prices.

The Rocky Mountain (PADD 4) region is another relatively isolated regional market, but one that still has access via pipelines to refineries in the Gulf Coast and the southern half of PADD 2. Additionally, demand in the Rocky Mountains is small compared to other U.S. markets. Together, these factors allow the Rocky Mountain region to rely on in-region refinery production and receipts from other regions in the event of an unplanned outage.

The Midwest is a large region consisting of multiple semiconnected markets, but without access to international markets via marine movements. PADD 2 refineries produce significant amounts of gasoline and the region has increasingly become dependent on in-region production, but the region still requires additional supplies from the Gulf Coast (PADD 3) to meet demand. In the event of a major unplanned outage, such as the August partial shutdown of the BP refinery in Whiting, Indiana, alternative supply comes from the Gulf Coast via several large product pipeline systems. Although this resupply option requires less time than acquiring supplies from the international market, it does require higher prices in the affected market versus the Gulf Coast to attract supplies, as happened in the summer of 2013 and in early August of this year.

The Gulf Coast is home to half of U.S. refining capacity and produces far more gasoline and distillate than the region consumes. Therefore, unplanned refinery outages in PADD 3 rarely have a large effect on wholesale and retail prices.

Gasoline demand on the East Coast far exceeds in-region refinery production. Additional supplies from the Gulf Coast arrive via pipeline and ship, but given existing infrastructure and regulations, are not entirely sufficient to meet demand. Therefore, the East Coast also imports gasoline, mostly from relatively close-by refineries in Europe and eastern Canada (Figure 2). In the event of major unplanned refinery outages — like those that occurred at PBF’s refinery in Delaware City, Delaware and the Phillips 66 refinery in Bayway, New Jersey, in late August — the East Coast’s alternative supply option is imports. Because gasoline cargoes are actively traded in the Atlantic Basin, and the distances involved are not as great as on the West Coast, East Coast prices tend to rise more modestly following refinery outages compared with those on the West Coast. 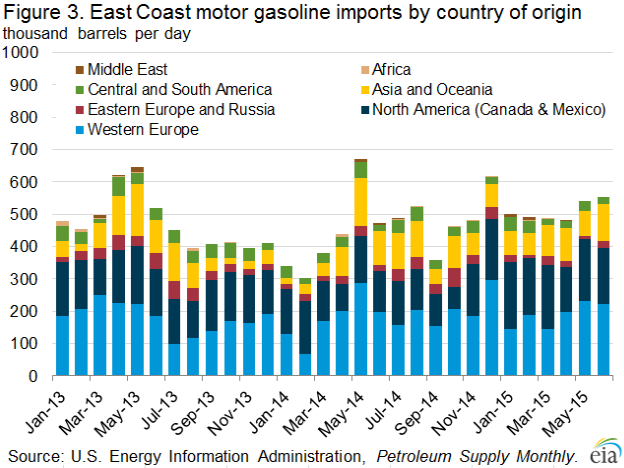 EIA will soon release its Refinery Outages: Fourth-Quarter 2015 report, with data on planned refinery maintenance for the remainder of this year.

For questions about This Week in Petroleum, contact the EIA.gov Petroleum Markets Team