The profitability of oil and natural gas development activity depends both on the prices realized by producers and the cost and productivity of newly developed wells. Overall trends in well development costs are generally less transparent than those in price and productivity, which are readily observable in the markets or through analyses of well productivity trends such as EIA’s monthly Drilling Productivity Report.

To better understand the costs of upstream (or, wellhead) drilling and production activity, the U.S. Energy Information Administration (EIA) commissioned IHS Global Inc. (IHS) to study these costs on a per-well basis in the Bakken, Eagle Ford, and Marcellus plays, two plays within the Permian Basin (Midland and Delaware), and the offshore federal Gulf of Mexico (GOM). The IHS study finds that upstream costs in 2015 for the onshore plays were 25% to 30% below their 2012 levels, when per-well costs were at their highest point over the past decade, and 16% to 20% lower than the average of the past five years (Figure 1). 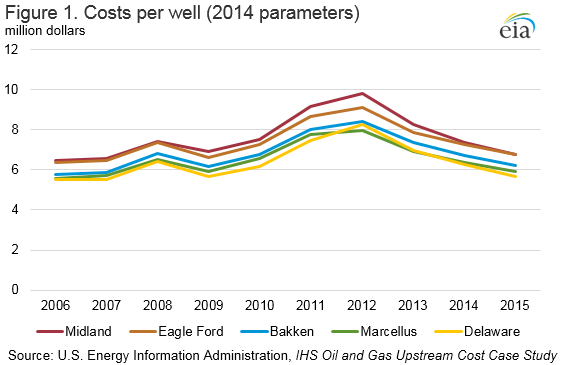 Changes in technology have improved drilling efficiency and completion, supporting higher productivity per well, but shifts toward deeper and longer lateral wells with more complex completions have tended to increase costs. To assess upstream costs of developing these plays in economic terms, the study applied the term unit cost, which compares capital expenditure with expected well performance to measure effectiveness, calculated as cost per barrel of oil equivalent (BOE) produced. Although some drilling costs have increased, the resulting performance benefit per well more than offsets those increases, leading to an overall decrease in cost per BOE produced (Figure 2). The unit cost concept does not, however, factor in the market value of the oil and gas produced from these wells, which is important for calculating net present value of profit or loss. 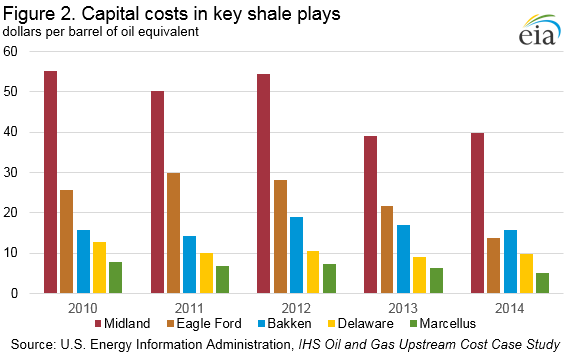 The use of multiwell pad drilling, more efficient fracturing and service providers, and decreased drilling times have all contributed to cost savings. At the same time, the use of longer laterals, better geo-steering to stay within the targeted formation, increased quantities of proppant use (to keep the fractured spaces open), an increased number and density of fracturing stages, and spacing optimization have increased well performance. Since oil prices started falling in mid-2014, reduced demand for drilling services has also enabled operators to renegotiate contracts with service providers, resulting in lower costs for drilling and well completions. Additionally, costs vary across the studied areas because of differences in geology, well depth, and water disposal options.

In the Bakken, lateral well lengths have increased to just under 10,000 feet to achieve a balance between cost and estimated ultimate recovery (EUR). Producers have also increased the quantity of proppant and fluids used at each stage, and a switch in the type of fracturing fluids. The type of proppant varies from expensive ceramic sand to cheaper natural sand between subplays, but is expected to move more toward natural sand. Well design and technology are expected to improve, but application of more proppant is not substantially increasing EURs, suggesting that as oil prices dropped in 2015, drilling operators switched to focusing on geological sweet spots rather than technological improvements to maintain production performance. Gathering, processing, and transport costs are high in this region because of infrastructure constraints associated with distance to markets and transportation being limited to rail (which can cost $5-$7 more per barrel than pipeline transport).

In the Eagle Ford, lateral lengths of wells have increased to 6,400 feet, while proppant and fracturing fluid quantities per stage have grown. Proppant mixes are focusing on cheaper, natural proppant allowing an economical increase of proppant. Also, more wells are being drilled on multiwell pads, allowing savings from shared facilities, roads, and water disposal systems. Unlike in the Bakken, an increased use of proppant directly correlates with production performance and abundant infrastructure, and proximity to markets decreases operating and transportation costs. Furthermore, in a low crude oil price environment, the Eagle Ford also has optimal production from site-specific drilling.

Horizontal wells in the Delaware and the Midland basins have increased their lateral lengths to 5,600 feet and 7,300 feet, respectively, with further increases projected. The Delaware Basin completion designs support 20 fractured stages with more than 6.2 million pounds of mixed natural sand and ceramic proppant and 6.6 million gallons of gel-based fluid. The Midland Basin designs support 28 stages with 8.8 million pounds of natural sand proppant and 9.2 million gallons of either slick water (low viscous fluid, mixture of water and chemicals) or gel-based fluid, with water-based fluid becoming more popular. However, even with these improving well and completion designs that have increased the EUR, sustained low prices have left unit costs in the Delaware Basin fluctuating and in the Midland Basin declining. Although horizontal wells in these basins have diminished cost savings in recent years, the Midland Basin is projected to have as many as 24 horizontal wells drilled from a single pad, potentially reducing costs by $700,000 per well. Similarly, horizontal drilling in the Delaware is expected to see incremental efficiency gains as more wells are drilled from multiwell pads.

Offshore projects are typically more complex than onshore ones, as they can require construction and installation of infrastructure unique to the project, and take years to develop. There are fewer wells from which to examine historical and current costs and a larger variation in the costs themselves. To demonstrate the variability in project costs, the IHS study characterized the cost profiles of four deepwater GOM projects representing the different plays, development concepts, and technical challenges offshore operators encounter: Chevron’s Big Foot ($4.3 billion), Anadarko’s Lucius ($2.47 billion), Deep Gulf Energy’s Kodiak ($1.2 billion), and Chevron’s Jack/St. Malo ($12 billion). Jack/St. Malo came online in 2014 and Lucius in 2015; Kodiak and Big Foot are anticipated to come online in 2016 and 2018, respectively.

The study delineated the main cost components of offshore projects and analyzed the key drivers behind each. The costs of drilling and completing wells in deepwater are driven by water depth, well depth, and reservoir quality, complexity, and productivity. The costs associated with constructing and installing the selected development concept are driven by design, reserve size, water depth, technical challenges, and infrastructure availability or proximity. The costs of laying pipeline used to transport processed oil and natural gas to an existing platform or onshore facility are driven by water depth, length, diameter, and capacity. Finally, the operating and decommissioning costs depend on the development concept.

Looking to 2018, with the significant capital investment offshore projects require and the current oil price environment, offshore operators are especially focused on reducing costs, increasing efficiency, and improving project economics. The IHS study estimates that a reduction in capital expenditure of at least 20% is required to move yet-to-be-funded projects in the most technically challenging play in the GOM to a $60/barrel breakeven. The study forecasts a 15% reduction in deepwater costs in 2015, an additional 3% reduction in 2016, and a modest rise in costs from 2017 to 2020.