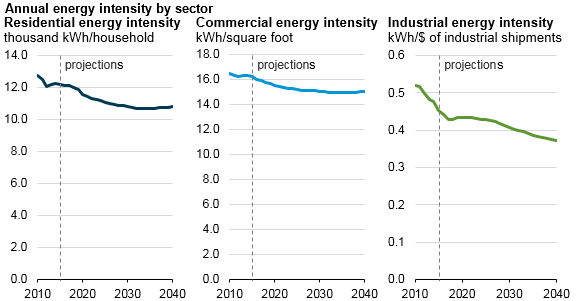 The residential sector currently is the largest electricity-consuming sector, with 1.4 trillion kWh sold in 2015. Electricity sales in the residential sector are projected to grow by 0.3% per year in the Reference case from 2015 through 2040 as the number of households increases by 0.8% per year. Residential energy intensity is expected to decline, with the average purchased electricity per household falling 11.3% from 2015 to 2040. Federal efficiency standards for most major end uses, including lighting, space cooling and heating, and water heating, as well as state and local building energy codes, are the main reasons for the electricity intensity decline.

Electricity sales to commercial consumers are projected to increase at an average annual rate of 0.8% from 2015 to 2040. Commercial sector electricity intensity (electricity sales per square foot of floorspace) is projected to decline 0.3% per year as total commercial sector floorspace increases 1.1% per year. Federal energy efficiency standards, as well as technological improvements in lighting, refrigeration, space heating, and space cooling, contribute to the decline in electricity intensity.